Inheriting Chinese Expressions, and Delivering Numerous Landmarks Back to the Homeland: An exclusive interview with Li Chung (Sandi) Pei (Son of I.M. Pei, Partner and Co-Owner of PEI Architects)

Mr. I.M. Pei, the worldly renowned architect passed away three years ago. During the time of his remarkable career, he gave the world numerous iconic masterpieces such as the Louvre Pyramid in France, the Suzhou Museum, and the landmark – Bank of China in Hong Kong.

April 26 marked the 105th anniversary of Mr. I.M. Pei’s birth. His third son, Mr. Li Chung (Sandi) Pei, took the time to accept an exclusive interview with the Yangtze Evening Post. Like his father, whenever Mr. Sandi Pei mentioned Suzhou, he always referred to it as his hometown. In his words, the name of the three brothers contained the father’s devotion and dedication to the motherland, and for this, PEI Architects [PEI] is staunch in giving back to the hometown; there will be some important landmark projects in Suzhou soon. 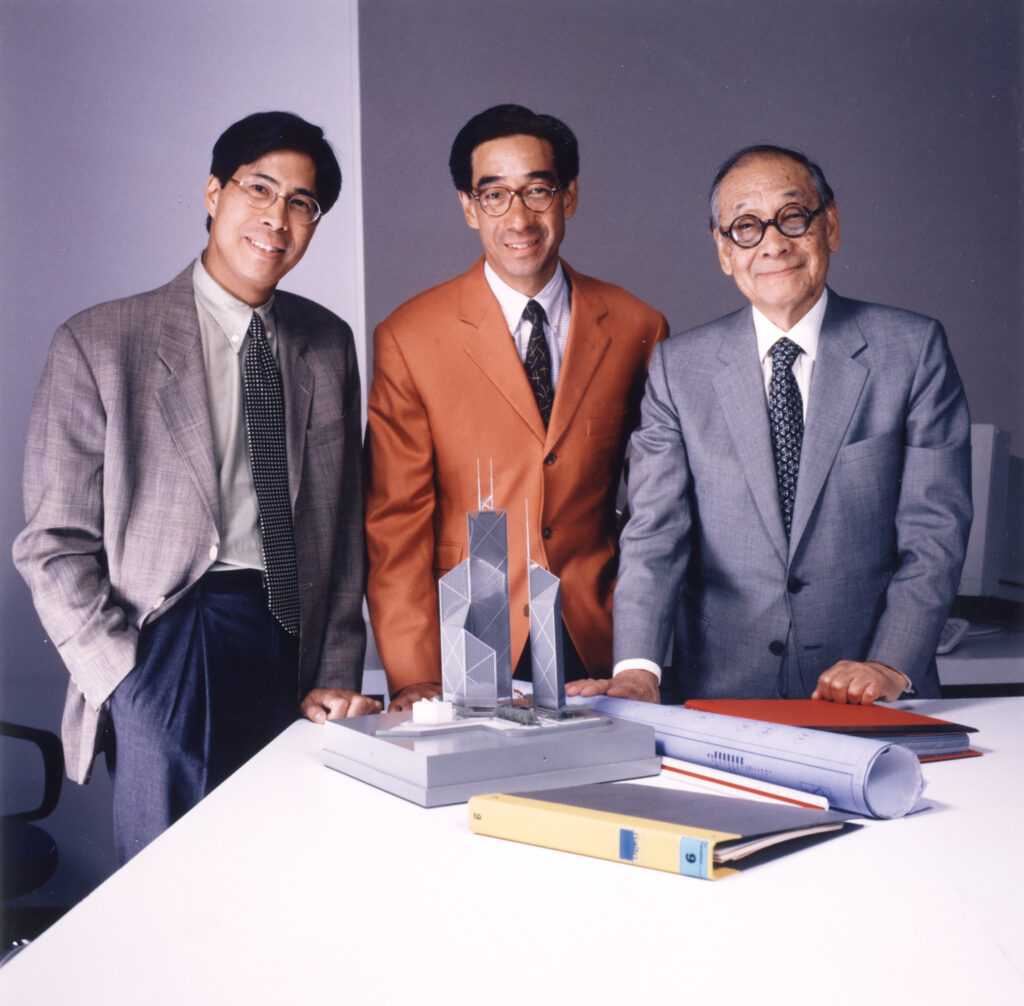 “I miss the iconic smile of my father, and my hometown Suzhou”

As a master of modernist architecture, I.M. Pei is one of the few architects who can become a subject of conversation in society. The story of I.M. Pei and his family has long surpassed the boundary of nationalities and cultures and is always considered fascinating to many people.

As Mr. Sandi Pei recalls, “The Pei family values are deeply rooted in the affection for family. In addition to regular family gatherings, there were the occasional parties to celebrate milestones in my father’s life and career. In 2017, for the 100th birthday of my father, there were 350 people who attended a festive event in New York that included many close friends.”

What makes many Jiangsu people proud is that whenever Mr. I. M. Pei was asked where he is from, he would always say that he was from Suzhou. As for his final work, the Suzhou Museum, Mr. I.M. Pei would also refer to it as his “little daughter.” Speaking of Suzhou, Mr. Sandi Pei said that he misses it very much. In his words, “like my father, Suzhou is also my hometown”; during the two years of construction of the Suzhou Museum, he went to Suzhou many times with his father, and frequently visited the site. And in 2006 both he and Mr. I.M. Pei attended dedication ceremonies marking the completion of the museum that brought local and national officials as well as acquaintances from abroad.

“Suzhou meant a lot to my father, and I find that its significance only gets more and more important over time. My father would often tell us that our family’s roots are planted in Suzhou”. He is very familiar with the family’s history in Suzhou. Pei’s family moved from Anhui to Zhejiang and then to Suzhou over 600 years ago. During the Ming Dynasty, they were merchants of medical herbs and as its prosperity grew the family was able to acquire Shizilin as its home. “Later, my father moved to Shanghai with the family, but since he was the eldest grandson, he had the responsibility of returning to Suzhou each summer to familiarize himself with the family business and study its cultural traditions. My father would often describe to us those summer times he spent in Shizilin where he would play in the garden among the rocks, trees, and ponds with his siblings; these memories were greatly reflected in his works,” says Mr. Sandi Pei.

For many people, I.M. Pei’s smile is one of his hallmarks; it is among the first things in Mr. Sandi Pei and his family members’ minds whenever they think of their father. His smile was very affecting. It reflected his sense of generosity, openness, and modesty. Although he would occasionally experience disappointment and regret, it would rarely affect his demeanor towards others. He treated everyone with dignity and respect.  “My father’s smile did not convey self-satisfaction but it was instead an expression of sincerity, warmth, and gratitude, as well as inner confidence and strength. I think this may be one of the reasons why people were attracted to him so much and felt committed to his goals.”

The names of the three brothers contain a devotion to China, and they have been active in giving back to their homeland

To many people, Mr. I.M. Pei’s achievement in architecture has reached the state of art, and it is also considered a big challenge for the three brothers to inherit their father’s professional and business success. However, in Mr. Sandi Pei’s words to the reporter, he has never been daunted by the challenge. Instead, he has always felt privileged and honored to work in the same occupation. He considers architecture a noble profession, aptly described as the “mother of the arts.” Unfortunately for the time being, Mr. Sandi Pei revealed there is currently no one from the next generation in Pei’s family that will pursue a career in architecture, however he hopes that in the future the Pei legacy will inspire one to take on its rewarding path.

Heritage has always been among the keywords at the PEI office. Every senior architect working at the firm was mentored by Mr. I.M. Pei for over a decade, and this of course includes Mr. Li Chung Pei and his brother Mr. Chien Chung (Didi) Pei. After graduating from Harvard University, both Pei brothers became architects in their father’s practice and started working on very foundational subjects such as detailed drawings and designing small units. In the 1980s, while Mr. Didi Pei was tasked by his father to oversee the Louvre Museum project in Paris, Mr. Sandi Pei was assigned to Hong Kong for approximately 9 years to lead the 70-storey Bank of China project.

In the “Post-I.M. Pei Era,” Mr. Didi Pei and Mr. Sandi Pei, as the two founding partners of PEI Architects, not only inherited the design philosophy of Mr. I.M. Pei but have also pursued a progressive agenda for a new era, bringing I.M. Pei’s convictions and principles many steps further.

Mr. Sandi Pei told the reporter that in 1992, upon his father’s retirement and with both his encouragement and support, he and his elder brother established the Pei Architects office. Notably, this year marks the 30th year anniversary of PEI Architects. “My father gave the firm much guidance and advice, including exercising care in choosing projects; always listening to and learning from the clients; being humble and hard-working at all times; and being adaptive and open-minded. My father, as a role model, had practiced these qualities throughout his career, and it is also what we learned during the 16 years of working with him.”

“My father’s concern for China had also played a big part in his life that can be seen from the names of his three sons.” Mr. Sandi Pei told the reporter that the names of the three Pei brothers demonstrated their father’s enduring attachment to his homeland. Mr. Pei goes on to add, “my father had been continuously looking for ways of utilizing his skills and talent to contribute to the development of China. His contributions were many and their continuation in our practice remains among our unwavering goals.”

Whether it is through the integration of modern architecture and traditional Chinese culture or through the rigorous and technologically engineered application of refined geometries and materials, you can always identify and comprehend the universal design vernacular in the works at PEI Architects. Moreover, they all share common ground with Chinese culture: Wisdom, Modesty, Positivity, and Kindness.

Mr. Sandi Pei observed that his father’s repeated visits to his family’s home had important influence on his work, in particular the gradual, evolutionary pace of change, and the relationship of nature and architecture. He saw the garden of Shizilin as evidence that creating something new requires knowledge of history and a respect for what had come before as exemplified by its beautiful rock formations. As my father often told us, the human intervention in the shaping over time of these porous volcanic stones was a practice that symbolized this sense of connection, of continuity, from one generation to the next.  It informed his search as an architect for timelessness and nobility in his craft.

In 2017, Mr. Li Chung Pei was invited to give a speech at Tsinghua University. During the speech, he said that many architects today pursue fashionable, unorthodox and controversial, styles, but what he values the most and will continue pursuing are designs that are of lasting quality and relevance, that is, not defined by their moment of creation but instead deeply rooted and enduring.

During the interview, Mr. Toh Tsun Lim, the current principal at PEI, who has more than 20 years of working experience with Mr. I.M. Pei, also told the reporter that whenever Mr. I.M. Pei was working on a project, he would not be biased towards complex and unconventional forms, but rather take the time to learn from vernacular contexts, and find the source of inspiration from the local culture along with the changes of time. He would express the essence of architecture through simple geometry, “for this, no matter what type of architecture PEI is working on, it will always place the emphasis on cultural essence.”

As a long-standing and well-experienced design firm, PEI Architects is still thriving at full capacity. Talents from PEI range from mid-30s to mid-70s, which renews and sustains the spirit and design philosophy of its esteemed founder. Not only does the firm’s productivity show no diminishing quality, but it is proven to be more resourceful, capable and confident.